From Qur'an || From Hadith

Say: "Shall I seek a lord other than Allah, while He is the Lord of all things? No person earns any (sin) except against himself (only), and no bearer of burdens shall bear the burden of another. Then unto your Lord is your return, so He will tell you that wherein you have been differing."
None can bare the burden of another... meaning each of us are responsible for our own actions in this life. we better be sure that we are following the correct understanding of Islam, within the guidelines of the Qur'an and the Sunnah... cause on the day of judgment we will not be able to point fingers at any one else.. not even our sheikhs, imams or maulanas. May Allah (swt) give us the correct understanding of Islam and help us to abide by all aspects of it. 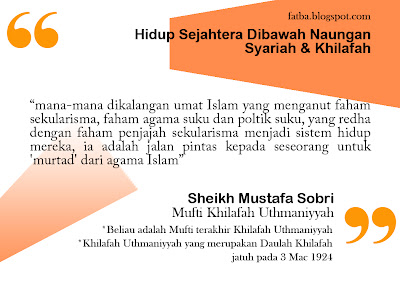 SHARED BY Panglima Kungfu at 05:51 No comments: 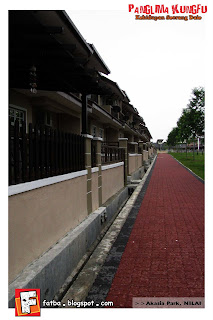 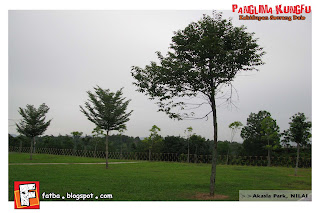 Q&A: Benefiting from Public Property in the Khilafah The following text is found in the draft constitution:

"Article 140 - Every individual from the individuals of the community (ummah) has the right to derive benefit from public ownership. The State has no right to allow any particular individual to possess, own or utilise publicly owned properties to the exclusion of other citizens."

The article says that benefit from public property is for the individuals of the Ummah, not for every citizen, or for the individuals of the society. As for the ahādith one mentions ‘Muslims' and the other mentions ‘people'. Thus is the case that we have used the principle of interpreting the general in light of the specific and thereby understood that the intent of ‘people' in one of the two narrations is ‘Muslims', and hence there is no right for the Ahl al-Dhimmah in the public property (except for the public utilities, as the evidences clearly indicate), or is there some other understanding in this issue? Barak Allahu feekum.

1- Article 140 reads, "Every individual from the individuals of the community (ummah) has the right to derive benefit from public ownership. The State has no right to allow any particular individual to possess, own or utilise publicly owned properties to the exclusion of other citizens."

The word ‘Ummah' is of those words which have more than one meaning [mushtarak]. It is used to refer to one person, a community, the Muslims, the citizens, the deen, etc. The intended meaning in a given usage is determined by an indication [qarīnah].

In the text of the above article we intended by ‘Ummah' the meaning of ‘citizens' [ra'iyyah], and this intent is indicated explicitly; we mention at the end of the article, "to the exclusion of other citizens [dūna bāqi al-ra'iyyah]".

This is with respect to the understanding of the text of the article.

As for the understanding of the two ahadith and the derivation that ‘citizens' are intended by the word ‘people' and the word ‘Muslims' in these ahadith, it is as follows:

In the two ahādīth ‘people' is more general than ‘Muslims'. However both texts are in need of a further clarification. This is because if you say that ‘Muslims' specifies ‘people' than the legal rule [hukm shar'i] is that the public property is for Muslims, and this is not the case because it is not for all Muslims. The Muslim who lives outside the Islamic State, that is, is not from its citizens, has no share in the public property of the state, and this is clear.

Therefore we hold that ‘people' is a general word and ‘Muslims' is one case from its cases [afrād]. In seeking the clarification of both words we find the hadith of Burayda, "...then call them to move from their land to the land of the Muhājirīn [dar al-Muhājirīn], and inform them that if they do so then their rights and responsibilities are like those of the Muhājirīn, and if they refuse to move then inform them that they will be like the Bedouins of the Muslims having the responsibilities of Muslims but having no share in the fay' and ghanīma unless they fight with the Muslims." This hadith is explicit in that whoever does not move to dar al-Islam and carry the citizenship of the state then he has no right in the rights of the citizens even if he is a Muslim. Thus both the words ‘people' and ‘Muslims' are specified by the hadith of Burayda by ‘citizens' [ra'iyyah].

Thus we understand the legal rule [hukm shar'i], namely that the public property is for those who live in dar al-Islam and hold citizenship.

3- This is with respect to the derivation of the legal rule from the two ahadith which you mentioned in the question, and it is as follows:

The hadith using the word ‘people' is general.

The hadith using the word ‘Muslims' is one case from the cases of the general.

The hadith of Burayda specifies the general ‘the people' such that its intent is only those who are citizens, regardless of whether they are Muslims or non-Muslims.

4- Notwithstanding the above there are explicit texts which apply to the Ahl al-Dhimma and show that they have a right in the public property. The roads and pathways [turuq] are from the public properties and al-Tirmidhi relates a hadith from Aa'isha (ra) that she said, "The Messenger of Allah صلى الله عليه وسلم had two heavy qitri garments. When he would sit and sweat they would weigh heavily on him. When bazz cloth came from al-Shām with a Jewish man, I said, ‘Perhaps you should go to him and buy two cloths from him to be paid for at a later date.'". This Jew who lived in the Islamic State used the roads of the Muslims for his trade, and these are from the public properties.

SHARED BY Panglima Kungfu at 09:25 No comments:

Email ThisBlogThis!Share to TwitterShare to FacebookShare to Pinterest
LAKARAN: Ekonomi

The World Cup and South Africa

SHARED BY Panglima Kungfu at 09:18 No comments:

Panglima Kungfu
Peace be upon you and so may the mercy of Allah and His blessings. In the name of God, most Gracious, most Compassionate. Hope that I can meet the Amir of the Ummah and suitable friends for me to talk about Islam. Respect and love to be friends that have responsibility to guide Muslim go to the truth part. 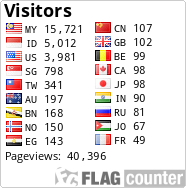 Prophet showed us
how to be a statesman
a father, a leader
Amir of jihad
a husband, a judge
and a friend